I actually have a real update.

I have taken a copy of the color schemes and went down and enlarged them to 1/18 scale.

Before I started the HIND I ordered a vacuform helo body in kinda 1/18 scale.

Originally I was going to use rubber sheeting to make the camo template but considering the nature of the rubber I feared that when I took it off the model it would smudge the paint.

So I figured that I would use the vac shell as a hard template .

After 4 days here is what I got and I am still not finished.

Hopefully I will have it and the boom done enough to do a trail paint .

Lee Patterson who was the VERY FIRST person to buy the Hind has changed his full build to the UN livery .

His will be the Mi-35 with the twin cannons on the starboard side and of course the wjite paint job .

So I will be offering the UN variant as well !!

[/quote]
Kirk Douglas : Mine hit the ground first
John Wayne : Mine was taller

Hmmm why is that UN Hind all blurry ?

Anyway the templates work perfectly .
I airbrushed some paint to check the edges and I am happy they way it tured out.
Nice and soft .
After I cut the temps I glued some rubber bands 1/8th inch tall and back from the edge. 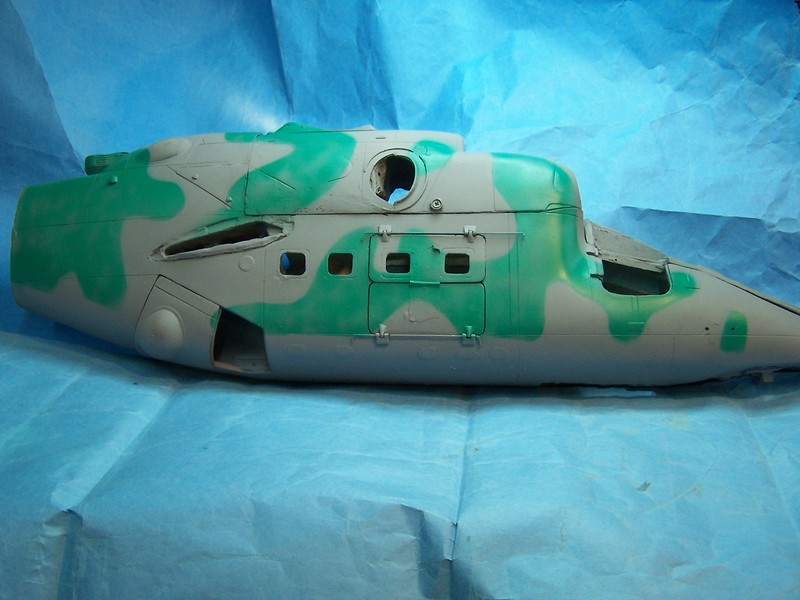 Dang Pickel thats an impressive template, I was wondering how you were
going to mas-produce camoed Hinds. Well done!!

almost for get lol
Top

Back set of temps came out great as well

I hope that the time saved will be worth a weeks worth of work. 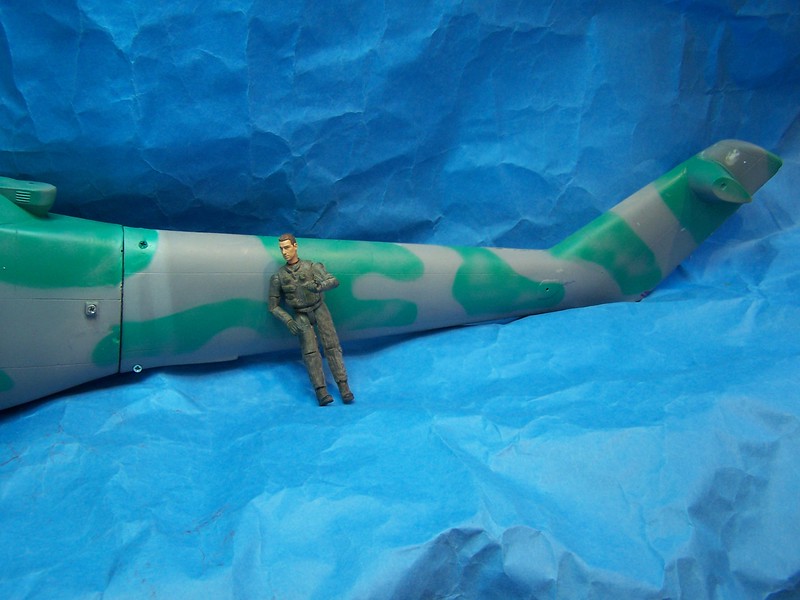 Great idea considering how many you'll have to do. Once I wrap my Cheyenne Dropship project I'm gonna tackle the Hind!
Top

normandy wrote:Dang Pickel thats an impressive template, I was wondering how you were
going to mas-produce camoed Hinds. Well done!!

You can mass produce anything as long as you have all the time in the world to complete it:)
Top

normandy wrote:Dang Pickel thats an impressive template, I was wondering how you were
going to mas-produce camoed Hinds. Well done!!

You can mass produce anything as long as you have all the time in the world to complete it:)

Yes time is something I do not have .

I have 6 kits poured lacking rotors and rockets .

I am working on the first 2 builds now .

Things are not so smooth but I have the fusalages all worked out and almost ready to accept the cockpit and crew cab .
I was going to try and do a step by step on how things are going so you guys that have kits can fallow me along.
This will slow down the builds even more .
If you guys want a step by step please let me know.

THANKS TO ALL OF YOU WHO HAVE GOTTEN FULL BUILDS AND ARE PATIANTLY WAITING FOR YOURS.

So far I have about 5 days into both builds at about 40 hours.
I have at least 40 more hours left finish .

You guys can do the math and see when I can get to yours .

Maybe 2 more MAYBE
But as far as my real work goes now is when it starts to pick up.
Kirk Douglas : Mine hit the ground first
John Wayne : Mine was taller

Here are the pilot and WSO paint masters .

After clean up painting these get easier and easier.
So you guys doing your own take heart.

I am doing my best to get the first 2 out but there are road bumps every ware.
I have been trying to button them up for final painting but EVERYTHING ELSE NEED TO BE BUILT AND PAINTED BEFOR THAT HAPPENS .

1. The main floor of the cockpit needs to be nipped and tucked to fit the front of the fuse. Go slow doing this.
The cockpit must be fully painted and built except the WSO gizmo in the very front and the 2 parts of the starboard side that goes against the wall.
These can be added later.
You must fit the nose gear and door prior to install.

2. The crew cab needs to be finished dry fit and the seat can be added through the top just before seal the fuse halves.
Do the floor first sliding it forward as far as it will go, Once fitted take it out .
Then fit the rear wall make sure it fits tight up against the ceiling rails.
Once done take it out fit the floor then fit the back wall.
Once floor is fitted fit the front wall on top of the floor.
Making sure your interior is painted at this time secure the windows and crew doors.

3. Dry fit the main gear and drill holes so they can be added.

4.Dry fit the wing lets. There will be some nipping and tuck to get these to fit tight.
The easiest way to fit the wings the same is place the fuse halves on a flat surface holding the wing in tight .
Then use a square against the belly of the fuse measure from the blade of the square to the drop down missile stub.
Make sure both sides measure the same then glue.

5. Before you final fit the wings the rocket rails should be fitted.
They probably should be fixed onto the wings and painted before final assembly .
Because you will have to deal with a 48 inch long fuse and taping and painting will be a challange.

6. Attach the main rotor hub .
I fitted everything together and once done I super glued the nut on the bottom of the mounts block.
In hindsight I should have molded an all thread in it and casted a nut in the rotor cap so that could be screwed on.

7. Once you think that you have everything squared away try and screw the fuse halves together. If you can leave the screws in and putty over.
Try to fit the tail boom may split the halves.
Once done and you think you are good to go, flow super thin glue to cement the halves together .
Of course being careful.

8. Glue the boom halves together putty sand and finish prep before paint.
After pouring the boom the stabilizer ( stabs) holes were off.
The boom should be epoxied together to the fuse using 1/2 hour epoxy.
Eye ball down the fuse to align the boom .Then allow to set rock hard .
Drill holes out for stabs .
Slide a dowl in the holes about 8-10 inches long and check alignment that way top and sides.
I tried this with the boom unglued from fuse and it was off , so I had to redo it .
Kirk Douglas : Mine hit the ground first
John Wayne : Mine was taller

Well I am finally getting paint on #1 in the Afghan livery .

You basicly have to finish all of the interior before you seal up the fuselage halves .

I inserted a steel rod through the entire length and built a platform so I can paint this beast. IT IS 4 FEET LONG.

I had to reconfigure my paint booth, now it is 60 inched wide with 4 blowers !!!

I am a big fan of pre shading and I fully painted the wings from pre shade to blue to alumnimum for the rocket rails.

It will be near impossible to paint them once they are attached.

My painting template work well but I have a fair amount of touch up that I need to do.

That paint job looks great, can't wait to see it done. Looks better than mine!

https://photos.app.goo.gl/fzeTEHcWzXJpRUQB9
"There are some people who disagree with me, they are wrong." --Gen George S. Patton
Top

Great job on this Hind Pickel, the entire project has been amazing to watch!!
Hey YT thats a sweet looking chopper, nothing wrong with it.
Top

normandy wrote: ↑
Wed Jan 29, 2020 5:18 pm
Great job on this Hind Pickel, the entire project has been amazing to watch!!
Hey YT thats a sweet looking chopper, nothing wrong with it.

I have tweeked out the paint and have drawn the panel lines in with a water based gray ink.

I think I got it just right.

Thanks guys.
So far it has taken about 3 days to paint the paint master .
I am short on decals and my supplier said he can not make anymore so I used stencils for the stars and tail flash.
I always intended to use stencils for the numbers and I supplied the number stencils in the kits .
The stars were pretty ease to paint .
I had my stencil maker make a blank star that I painted the base white of the star.
Once that dried , I applied another stencil on top of the white star and shot on the red.
The tail flash worked the same but that was closer to a nightmare to do .

Hey Guys,
I made a MAJOR SNAFO .

The color call out that I made for the cold war scheme will be this green on tan.
But I will keep the pattern that I am using .
Contact or post me if this is not agreeable.
[

So here we go

The full builds will be in this order.

Feed back is welcome

Cold War-REMEMBER I WILL NOT USE THIS PATTERN ...I WILL USE THE SAME PATTERN AS THE OTHER SCHEMES.

AGAIN FEEDBACK IS WELCOMED
Kirk Douglas : Mine hit the ground first
John Wayne : Mine was taller

I have given it much thought and the clover leaf pattern is an iconic image of the cold war .
So I will be making it.
That will take another 3-4 days to make the template, so the cold war scheme will get bumped to 3rd place in order.

Super Good! I am actually so impressed by what you are doing, and have created, I didn't know what else to add!

It is absolutely AMAZING.

I think you may be one of the finest model builders, ever.

Can't wait to get mine!
Top

It is absolutely AMAZING.

I think you may be one of the finest model builders, ever.

Can't wait to get mine!

Very kind of you to say.

This will be a 4 day weekend for me because Tues will be Mardi Gras and I REALLY do think the master paint will be done .

I need to final paint the main rotors and final assembly will start.

Here is a neat detail that you guys building may want to try.

Painting the rocket pods:
After the usual putty ,sand and priming .
Paint the pods flat black. Allow to dry.
Then paint with aluminum spray paint.
Let dry a day.
Using 1500 grit wet/dry sand paper , wet the pod and LIGHTLY sand in a circular motion all over the pod.
This will transform it from a shiny brad new pod to a well worn pod looking like actual aluminum.

Aged on the left freshly painted on the right.