This is the place to put those reference links, posts on books, movies, photos, and etc.
Post Reply
2 posts • Page 1 of 1

Check this site out. It is a repository of various articles, bulletins, war reports printed DURING WW2.

I found the Technical analysis and "How to beat a Tiger" Intelligence Bulletins very interesting, as these were the instructional publications and news reports used by our boys in WW2.

Lots of fascinating stuff on this site:
http://www.lonesentry.com/index.html 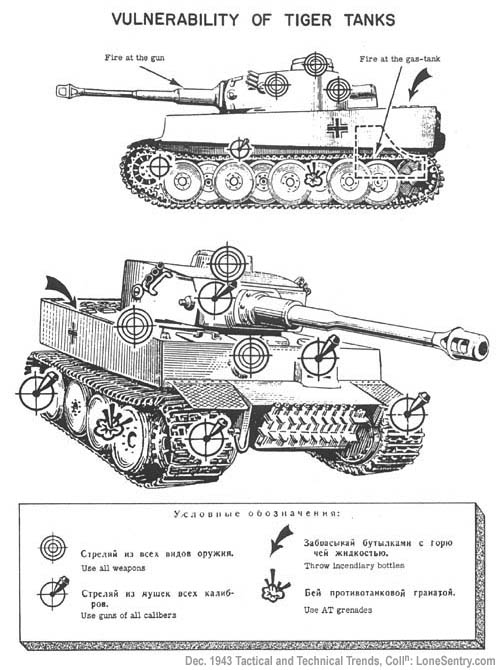 Pretty cool! They've got you aiming at all the little weak-points in the armor. Very difficult if you're an allied gunner under pressure.

The idea of hitting the gun is interesting. In the Combat Missions Afrika Korps game that I have, I once made up my own mission that essentially had Tigers going up against Shermans in an Italian village. I thought it would be a very one sided fight - which it ultimately was - but of the five tigers going up against 5-6 Shermans, all but two of the tigers were rendered incapable of fighting due to the gun being damaged or the tracks knocked off. The ones with the damaged gun could still move about, just not do anything useful!
Top
Post Reply
2 posts • Page 1 of 1

Return to “The Reference Room”