My credit card was charged so I think we are very close to this piece shipping out. I imagine that Badcat had the labels prepped early and knows the tracking numbers. Once the packages are scanned into the system by Fedex we will probably get our expected delivery dates and the transit time.

Being I am on the East Coast, I may get mine late but I do planned to do a detailed review of this piece for the board.

I think the big question on this piece will be the detail and the quality. If both are good, this piece will keep 1/18th alive. If they are not and another dog has been delivered the the 1/18th masses, it could be the end. Excited to find out and keeping my fingers crossed.

I ordered from flying mule and they said today maybe Badcats jumped the gun as they don't have it and they are on the west coast.
Top

At least we know they are coming now

From "Tales of the Cat" Bat Cat blog:

Thank you to everyone who ordered the sold-out 1:18 Coral Sea SBD Dauntless. The SBDs reached Merit's warehouse today. On Wednesday, our truck will be dispatched to pick up our Dauntlesses. Some of the planes will be delivered directly to the Fedex Ground hub and those requiring special handling will come back to the Bad Cat facility for shipment on Thursday and Friday. Won't be long now, guys!

Bought from the Cat. FedEx indicates arrived at FedEx location. I am on the east coast too, so don't anticipate to be one of the first ones to get it, but I can't wait.
Top

Confirmed shipment to my house by FedEx: due the 19th.
www.TheLiterateShow.com
Top

Just to get everyone excited some more! Taken at the Reading World War II Weekend the first weekend of June! 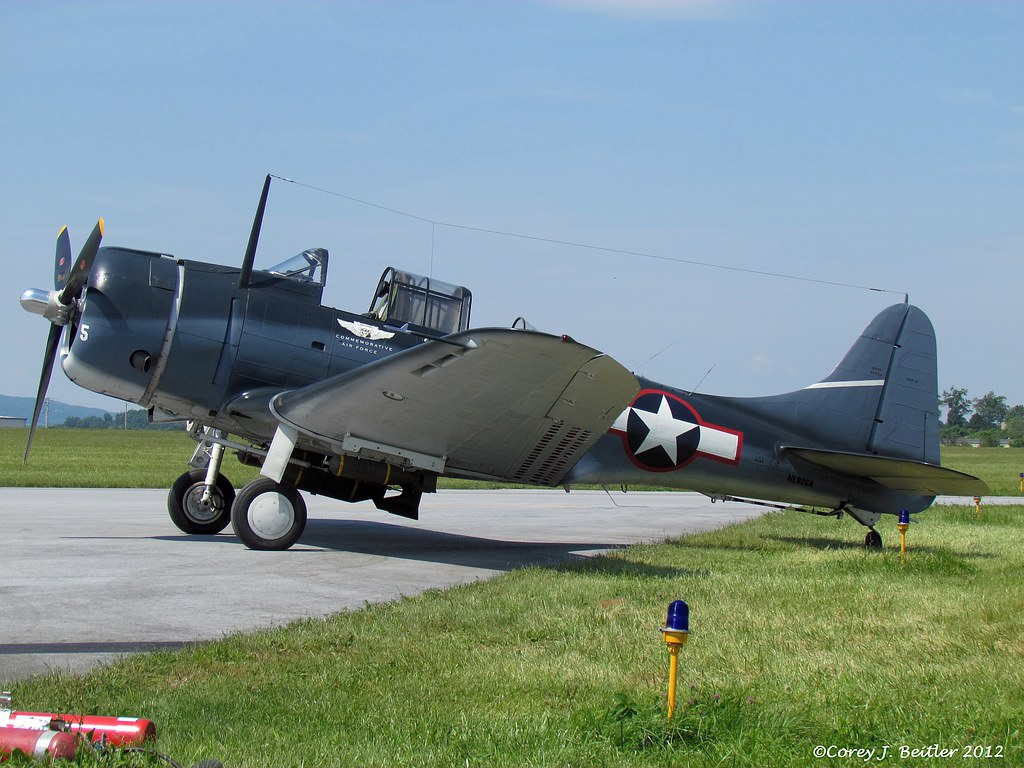 Cory is this a future Merit release?
www.TheLiterateShow.com
Top

Ditto: shipped with an estimated delivery date of 19 June!
Top

In my hands in Los Angeles!

Now to open the box.
Top

Welcome to the board GWHinLA.
Let us know what you find in the box.
Top

Got my Dauntless this afternoon

I'll leave the more detailed reviews to other members like Corey, but, in short, the Merit Dauntless should be credited as one of the best and most detailed 1:18 aircraft yet produced. Certainly worth the wait on this aircraft type from the Admiral Toys days to now. Puts even the best BBI aircraft to shame, never mind the garbage from 21c.

This plane is a model - not a toy like most past 1:18 aircraft. It is sturdy, but has delicate parts and one must use care with it.

The wings were a bit tricky to get on and fit right, but I eventually got them. Getting figures to fit in the cockpit was another challenge. I really wanted to use my BBI pilots as they look the best, but that figure doesn't fit into either the pilot seat or gunner seat without modification. The lower legs on both of mine have been removed so they fit decently.

The flaps are not loose, but have trouble closing all the way, so there are gaps between the split flaps, at least on my plane. Rudder is also a bit loose. Other movable surfaces are tight. I've not yet tried the rear canopy folding. The MG folds up into its stowage bay nicely. The doors open, gun pulls out, and you even raise the sight. Bombs don't seem to be designed to be removable, but they look fantastic nonetheless, with fuse detail and all.

Cockpit is fantastically detailed with the instruments, switches, controls, sights, etc. Its the best I've ever seen in a 1:18 plane, even with the good BBI aircraft.

You really have to see the Merit Dauntless in person to get the full effect. I'm sure the Midway Dauntless will be just as good and I'm going to preorder one as well. Fantastic job, Merit, fantastic job

Thanks for the quick positive review Tman

Sounds like there's an opportunity for Kris to do an acrylic stand for a steep dive-bombing display, or hang it on the ceiling

It does look very good, and is just the shot in the arm that 1/18 needs right now. As good as I was hoping for.

Thanks for the review! So this thing actually exists, lots of people will be impressed as we get the word out.
www.TheLiterateShow.com
Top

Got my plane in a hanging display this morning, in a dive with the flaps open - probably one of my most dramatic-looking models now

A few addendums to my review above...

In the best spirit of 1:18 scale, there are a ton of working features and other details on this model:
-- Freely-spinning prop
-- Movable control surfaces (flaps, ailerons, elevators, rudder)
-- Retractable landing main gear (doors move seperately from strut. They have a tiny pushrod you can assemble to accurately "connect" the door to the strut, but its really tiny and I didn't bother to put it on...)
-- All wheels roll and the tail wheel can turn
-- Arrestor hook is not functional
-- Working canopy (pilot's canopy slides open & closed; rear sections pull out and fit in place)
-- MG bay doors open & gun lifts out
-- MG can move up & down and has a flip-up sight
-- 500lb bomb can detach and trapeze works, but the bomb doesn't seem to come off the trapeze.
-- Lots and lots of model-quality details in the tooling, particularly in the cockpit. Merit didn't skimp on much!
-- Very accurate paint job representing an actual aircraft. Lots of little stenciling details as well.
-- Realistic weathering for the most part. The black streaks on the side of the fuselage could have been tonned down a bit. My favorite weathering detail, however, are all the little paint chips. The plane has a worn, used feel to it, despite being brand new!

The Merit Dauntless was designed as a model, not a toy. Most of the 1:18 models we've gotten in the past have been model like toys, this is sort of the other way around.

As such, one of the trickiest parts is getting figures to fit in and around all the cockpit details. The plane wasn't designed to hold a bulky 1:18 scale pilot action figure, at least without modification. I really wanted to use my spare BBI WWII navy pilots in the plane as they look far more realistic than the more toyish 21c pilot figures, but I had to remove the lower legs (from the knee down) to get them to fit, which required the boil-and-pop method. The 21c Corsair pilot will likely work well with this plane and the lower legs can easily come off for that figure to fit. The 21c Avenger crew figures are nice and slim, but have the leg issue and look cartoony.

Still, this is a fantastic new 1:18 model - just what our hobby needed

great review Tman. I passed on the S1, due to space concerns, pre-ordered the Midway version last week. Looking forward to getting it this fall.
i never met an airplane i didn't like...
Top

Great review! Cant wait for it to arrive. two 1:18 scale birds in one month! Hooooahh!!!

check this one too :

TheFlyingMule still has a few of these in stock, for anyone that didn't order a Dauntless and now wants one:

Thanks Tman, just ordered one from The Flying Mule. Wow, this is a beauty, can't wait to get it. One question, does the prop attach really well?
Paul Hebert

It's been a long road, but I am still in the game.

tmanthegreat wrote:TheFlyingMule still has a few of these in stock, for anyone that didn't order a Dauntless and now wants one:

I was aware of that and when I saw your excellent pictures, I immediately ordered from them! I am
thrilled to get one and even happier that I didn't have to support Badcat. Great service and free shipping from Flying Mule.
"There are some people who disagree with me, they are wrong." --Gen George S. Patton
Top
Post Reply
700 posts