Your forum dedicated to 1/32nd and smaller plastic and metal figures and vehicles.
Post Reply
7 posts • Page 1 of 1

so, how much do you think? the instructions say about 70 grams behind cockpit area- maybe if you just cut the rear section of the fusilage off behind the wings..... I started with pieces of curtain lead weights behind the cockpit along with the recesses on either side of said cockpit. I Added a little more in those areas. I then ended up removing the glued-in radiators in the engine cowings and replacing with more lead. AFTER using spare lead laying around for the cockpit area, I still had some current .58 3 ringer minnie balls from the old re-enacting days- this took almost all of both (flattened and cut to fit pieces epoxied to said cowlings. This model feels like it weighs about a pound or so....

Have any of ya'll built this one?
Top

Looking very nice. I built the same kit few years ago. I do not remember how much weight I used. I filled up all the empty space I could find in the cockpit and both engines with lead

Looking like its coming along great.
A very long time ago I made several Revell 1/32 P-38's. Back then I loaded the nose and areas behind the props with worn out Carbide lathe inserts from a machine shop. They are very heavy. I was thinking about making the landing gear out of steel or aluminum rod cause I was afraid that after time the weight would just bend the plastic struts. What I ended up doing was making a large letter "T" out of plexi glass so that the ends just came past the spots behind the 3 landing gear. I attached what I would call "jack screws". I was able to raise or lower the screws. When I placed the models on the jack screws The tires are just off the surface thus taking all pressure off the landing gear struts. When not out on display at an event they sit in my show case on these rigs. They have kept the struts from bending for 25 years. 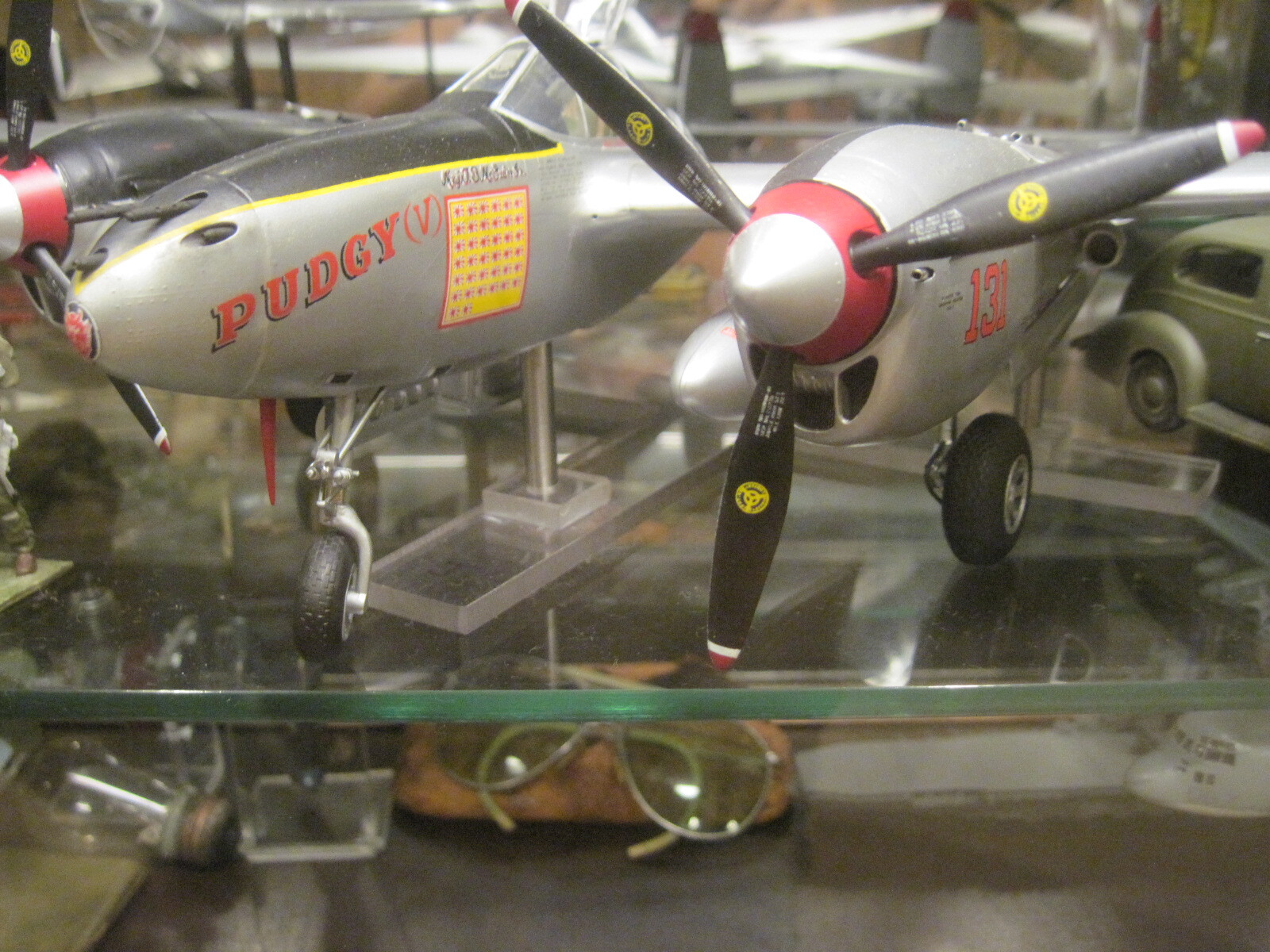 Mike, that’s a fantastic-looking HE-219! I really like how you did the subtle mottling effect on the upper surfaces as it looks very realistic

However, your nose weight issue reminds me of a similar experience I had about 20 years ago when I built the massive Revell 1/48 scale B-29... There were no specifications for how much weight to include, so I glued in all sorts of weights in the nose, engine nacelles, anywhere forward of the center of gravity that couldn’t be seen... I used mostly steel bolts and and lead fishing weights and the model easily weighed 5-6 pounds or more. I had issues where the model glue (Testors) reacted with some of the metals in the weights and warped the plastic in some places. The model held together for probably about 10-12 years after that, but then one day fell apart, no doubt due to the heavy weighting and weakening of the glue over time

Oh I forgot to add that the pics of the P-38's were taken recently so I would consider adding some kind of lifting device to take the weight off the landing gear and your work of art will last many years.
Top

Oh I forgot to add that the pics of the P-38's were taken recently so I would consider adding some kind of lifting device to take the weight off the landing gear and your work of art will last many years.
Top