Your forum dedicated to 1/32nd and smaller plastic and metal figures and vehicles.
Post Reply
195 posts

That I can understand, my town actually has a business here for things such as this, and 3d printing, and all that, so I guess if someone else that don't have the right printer, or a local business to make these prints, I can see how it could be a bit difficult...
A helicopter does not want to fly, it just vibrates so much that the ground rejects it
Top

Not too much done in the last week, but did manage to get tools and small bits painted. Also worked some rusty exhaust magic. I get most of Saturday to finish up the tanks themselves then I will get all the tracks this week. Then I apply weathering over everything and that will be four more in the bag.

That will leave me with 27 to complete right now, and another 49 unbuilt in my stash.

very nice. At this rate you could open a hobby shop in no time

Halfway through the weathering process:

If you want to add to your British aircraft, here's a 1/32 Lancaster kit
Ebay# 171473731236
A helicopter does not want to fly, it just vibrates so much that the ground rejects it
Top

No balsa kits for me, thanks. I'll just wait for the plastic kit from HK Models that is coming in a few months.
Top

Stick a fork in them, they are for all intents and purposes done!

If anyone is to ever release another TIGER I in 1:32,
it had better be an EARLY TIGER I like this one!

Decided to clear my head before tackling more armor, and dove into another old Revell kit. This time I chose the Hawker Hurricane MK IIc kit that was reissued in 1998 (new decals, same 1970's mold). Another outdated kit with raised panels lines and virtually no cockpit and plenty of fit issues. To top it all off, I misplaced the decals and had no backup British markings. As the kit was based off the older MK I kit it had many incorrect parts, most obvious of which are the wing panels, as they are very different between the two types. I had no desire to tackle a complete sanding and rescribing when all I had to do was pick up the better PCM kit or hope for someone to release a new tooling.

So I decided to do a plane with simple markings that would be quick and easy to achieve given that my heart was rapidly going out of this fight: One of the Turkish Mk IIc's the British supplied Turkey with as part of a reconnaissance squadron in 1942.

The plane is completely hand painted with the exception of the initial primer coat; everything else was by brushed-on acrylics and enamels and applied dry pigments.

It shows. I don't care, as hanging up over my head mixed in with all the rest, it looks enough the part to pass. I'm just glad it's done and I can go back to my panzers.

The Turkish Mk II looks good. As long as you're happy that's all that matter

I build for fun not for displaying in museum.
Top

I have just applied an overall dark wash and will be finishing up with chipping/rust/dust effects tomorrow, but these are basically done and I'm off to the next in line!

I have the 234/4 but it is a Dragon kit and these were all Italeri, so the the assembly line process I was using would not have applied. The Dragon kit has made me realize I will need to replace these some day, though.

I believe my next to complete will be the Jagdpanzer 38(t), Marder III, Jagdpanzer IV L/48, and Wirbelwind. With any luck, I have enough paint on hand to lay down the initial Dunkelgelb on all four by Sunday night. Family is out of town until Monday!
Top

Nice work on the armor and Hurricane. I especially like the grey Panzer and Tiger.

On the Hurricane you are using modeling clay to separate the colors prior to painting the next. It's been a while since I built any model, but this is a novel thing and solves a lot of tedious masking it would seem.

It's actually that rubbery blue stuff you use to hold up Post-it notes - more like stiff Silly Putty than clay and doesn't have the oil. Got the idea off an armor forum but it really works on planes since there are fewer small bits to work around.
Top

That's good to know, thanks.

I use the stuff to form irregular edges as straight stuff like Luftwaffe splinter is easy to manage. Depending on how thick you make the roll it determines how hard/soft the edge is. You won't get a super hard edge, though, unless you press down pretty hard - which might be dangerous! You can then use bigger tape scrap to cover the big areas.

I find this much easier than trying to cut irregular shapes from paper. Always keep something nearby to rest it on as it will slowly try to sink into paper. I keep a block on back of a Magic the Gathering card as that has a glosscote on the surface.
Top

Okay, last photo shoot. I am calling them done.

Simple kits with not much detail inside beyond seats and steering wheels, but they go together with little trouble.
Last edited by [CAT]CplSlade on Wed Feb 18, 2015 6:41 pm, edited 1 time in total.
Top

Just want to say all the models look great. Thanks for sharing!
Top

Sneak preview of my next batch. As is the case for most of us, it is bitterly cold and so my workshop is too cold to paint in right now so I am waiting to lay camo and then finish up with the weathering.

Still contemplating my next 1/32 aircraft build. All excited about all my big bombers but I think I might be turning Japanese for this next build.

After these five I will have just 18 unfinished vehicles out of the initial 37 I started January last year.

Also got to get those dudes painted so I can seal up the turret on the Flak gun.
Top

All done except for some small touch-ups here and there and maybe a bit more weathering depending on how I feel.

What am I working on in this next batch?

I have been doing them in batches of five, but recent events prompted me to add one of the vehicles to this set, and in reality I am doing seven vehicles ATM as I am doing a repaint of a 1/32 AFV for someone, so I figured I may as well do the 1/35 version at the same time. Only twelve more to go and then I can start some new projects.
Top

Camo done, heading for the finish line. Also, those with long memories may recognize the 1/32 Sdkfz 231 I did a while back that was covered in green spots. Well, she's been sold and is being repainted and should look much better than before. Hopefully.

The Panzer II Flammpanzer and the Bison await the building of the tracks before I can lay primer.
Top

You do amazing work!!! Thanks for showing all your projects. Looking forward to your future builds. Keep them coming

This also counts as the auf Pzkpfw 1a und 1b since the only difference is when they were converted, really 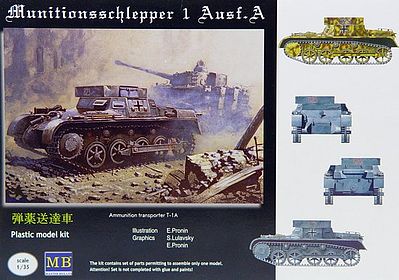 This puts 86 pieces of German hardware in my collection at this point, with 23 on or almost on the shelf and another 12 by end of summer if not earlier. I'll then have more tanks and trucks than I did when I was still collecting diecast 1/32.

Still have 23 planes mixed between 21C/FOV/BBI. They actually hold up better against their kit counterparts than the armor does so I don't feel as compelled to replace them. Plus, I like my three non-German 109F's that I did.
Top
Post Reply
195 posts