Your forum dedicated to 1/32nd and smaller plastic and metal figures and vehicles.
Post Reply
12 posts • Page 1 of 1

Hello,
I have been a long time reader of this forum but rarely post. I am more into 1/6 scale items. Might be of interest for some but I just returned from the retail store Tuesday Morning and came across a stack of 1/32 scale warplanes from 21st Century. I came across a dozen FW-190As and early Mustangs. Price was 9.99, seemed like a steal.

While these are repaints of previously released 21c aircraft and do come in 21c boxes, they are actually the handiwork of 21c's successor company, AllGo. They are actually new items and were meant to be a rushed effort to get items out quickly, but this backfired - badly.

Hi everyone, I had a chance to talk briefly with the CEO of AllGo this weekend. I asked him specifically about the releases of these 1:32 planes. Here is what I got from our conversation.

1. Are these planes new planes or old stock? A: These are new / freshly minted aircraft. There were no overstock left on 1:32 planes.
2. Why no change on the stamp and copyright date? A: Mostly it's legal stuff- It needs to remain copyrighted and originally minted by 21C as the company is still phasing many of the agreements from one entity to the other. Any new molds will be minted differently.
3. Why the old box art? A: Again, it's partly some legal requirements from a license standpoint. Also, there was not enough time to engage thinktank creative (my firm) to make the required adjustments even if there was not other complications previously mentioned.
4. Why no pilots? A: Cost was one factor, that combined with the thought that it seemed the trends were moving towards placing all emphasis on the plane only.

Resolution: This was a rushed effort to put a foot back in the door using what limited resources were available. Without any mass retail support, any effort is very costly. The market is much smaller, the planes have become very costly as China has increased building costs by 3-4X more than 4 years ago. Every penny had to be evaluated. If these sell through there is indeed a plan to move ahead with more releases The next planes in 1:32 will be new paint schemes. Not new molds yet... but investments made into new paint. I was told that these would be 2 planes. And not the P-51B/C or the FW-190A. (my money is on Spitfire, P-51D, Stuka or Bf-109)

The next release will feature the new branding of All-Go and ship in an all new collector box. Pilots, based on feedback will likely now be re-included with follow on releases. If those new painted planes do well, there are plans to bring out new subjects never before offered in these scales as prebuilt, pre-painted, display toys.

The CEO thanked me for calling these to his attention and expressed his sincere thanks to everyone in the collector community for their continued support. He thanked me for my efforts to continue to build that bridge. Also wanted to express his own desire to move into new subjects as quickly as he can, recognizing that it is the only way to move ahead and strengthen the company position so that it can become a major player once again in multiple scales and subjects! Hang in there everyone. Hopefully the best is yet to come.

Hopefully this sheds some light and puts some longterm concerns to rest. I'll continue to keep everyone posted.

Not only were the aircraft repaints of repaints, they suffered from some of the same QC defects as the 21c items did (which I only observed after seeing 14 of them together at a Tuesday Morning store), they did not come with pilot figures, and initially cost twice as much at the original $40 asking price. Within 2-3 months of the original release to the small retailers, the planes were discounted to $20 and now they are showing up in droves at Tuesday Morning for $10. Another great sale of 21c/Allgo items and probably the last we're likely to see.

This, combined with the fact that someone probably related to the AllGo company is selling off the old 21c archives, gives me serious doubts about the future of that company.
"If you fail to plan, you plan to fail."
Top

Interesting information. Thanks for sharing. I had picked up a few of each plane over the weekend and was curious as to what the heck these were (old Ultimate Soldier stock or other?). I actually like them and think the color/paint schemes are pretty nice - esp. the Focke. Personally, while the pilots would have been nice, not much to do with the pilots aside from maybe place them in the cockpits. One can not complain over the Tuesday Morning price of $10 each. I hope to see the value go up on the 2nd hand market.
Top

For the right price, I believe $9.99, they can always be repainted or modified to be downed aircraft.
Ketelone

Not a bad idea - I'm thinking about hanging for a little air battle or creating an air field scene.
Top

I went to 2 Tuesday Mornings today and picked up two 190s and one P47. I am going to keep looking for the P51s. At $9.99 I can repaint them or modify some slightly to make a 'squadron'.
Ketelone

I apologize. I misspoke. It's the P51 B/C Shangri-La. Another senior moment. I just glanced at it and I saw a P47. Sorry. I am a dork.
Ketelone

I opened one of my Focke-Wulf Red 19s today. It's actually a neat little model. The retractable landing gear is pretty slick as well as all the additional details. For $9.99, one can't beat the price. I'm just going to have to find some pilots now.

EDIT: Went to Tuesday Morning today and there were still a lot on the store shelves.
Top

Well I opened one of my P-51B planes from Tuesday Morning. There is nothing about this unit that would make me believe it wasn't made in China, in the same facility, by the same people and under the same standards as the other 21st Century Toys. Yes, I know, there was a Q & A with All-Go that tries to explain away all this but... Everything, right down to those wire ties which I have always said are done by some evil Chinaman who is snickering as he makes the ties so you say at least one curse word before you get them untwisted.

I can't believe another company could duplicate that technique the 21st Century Chinese had down to a science that was so annoying.

Perhaps All-Go owned the rights or even leased the facility by the time these were made but I'm not buying that these are anything but made in China at the 21st Century Toys factory by same people and machines and ASSEMBLED there too. Am I misunderstanding what All-Go means on their website by "American Made" and "American Owned and American Managed Company"

Surely the idea of cost cutting by not including pilots was in the thoughts for 21stC before they ever heard of All-Go. Also, marketing 101 would say you put something..anything...a tiny slip of paper, a 2 cent per thousand little sticker, a rubber ink stamp...something that puts the name ALL-GO in front of the consumer.

None of this really matters to anyone else and shouldn't be taken too seriously as it is just debate fodder, but to someone who has been in retail and marketing all his adult life, this has been gnawing at me as none of this is making any sense. When it has been reported that these units seem to have the same QC issues as 21st Century made pieces looks more and more to me because that is exactly what they are. I saw the identical bent up cannons on the some of the FW-190s myself. If it looks like a duck, walks like a duck and quacks like a duck, there's a good chance it's a duck.

At this point everyone associated with 21C/All-Go needs to step back and take a minute. If they really want to get back in the game, they are going to have to cut all ties with the past and market themselves as an all-new company.

Because a stigma is attaching itself to their name big-time.
Top

I suppose this is really getting off topic, but I love Ultimate Soldier/21st Century despite some of the quality issues mentioned above.

I tried some photography and photo-editing today and thought I'd share a picture of my Tuesday Morning Focke-Wulf Red 19. I like this plane and look forward to trying something similar with the P-51 Mustang. 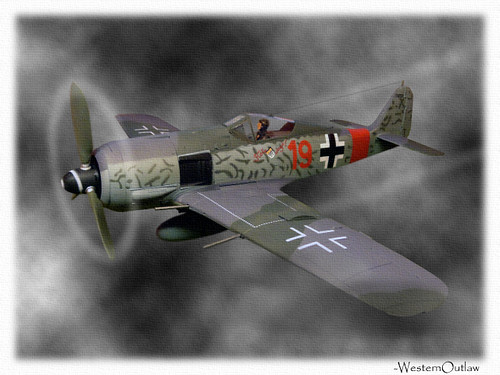 For those of you who don't have a Tuesday Morning in your city or near you, this also helps you get an idea of what the FW looks like. Please note: the pilot was added through photo-edit.
Top
Post Reply
12 posts • Page 1 of 1