Pat, When are these going to be added to the catalog. I now need a set! LOL
Top

Great idea for the Indy staff car, it needed doors.

The IJ to Kfz kit is in the store now:

I added an optional MG42 and connector that attaches to the roll bar. It's not realistic, but seemed like a pretty fun idea to me.

Thanks Pat, for getting the kit up in your store for purchase so quickly!
Thanks Normandy for your post as well. I managed to pick one up. I'm sure that someone will pick up that one.
Top

I was in my Hobby room, looking for reference materials that I could use for this Indy Staff Car. I found, "The Medium PKW of the German Whermacht 1937-1945", by Dr.Hans-Georg Mayer-Stein.
The are a LOT of great photos of this type of PKW. It appears that the Indy Staff care is loosly based on the PKW 15. I will continue to search my Library for other reference materials.

Upon further online research and reading Pat's description, it appears that this is actually a PKW 1. I suspect that the PKW 15 was a Medium version of this vehicle.

When the Troop Car first came out ten years ago I came to the conclusion that it most closely resembled a Stoewer R200 which was a light PKW Kfz.1 so that's what I converted mine into. 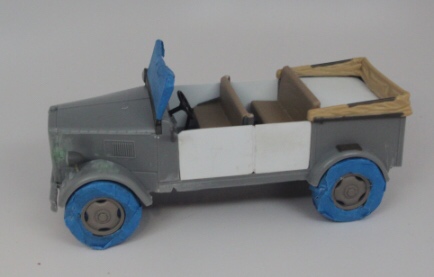 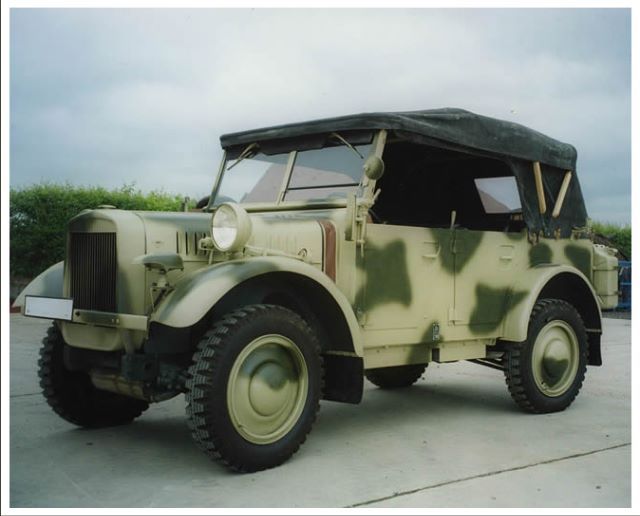 I later found out the Indiana Jones vehicle was supposed to be a Mercedes G5.

This is the Kfz.1 version of the BMW 325 who along with Hanomag, Stoewer and Mercedes also made the light PKW. 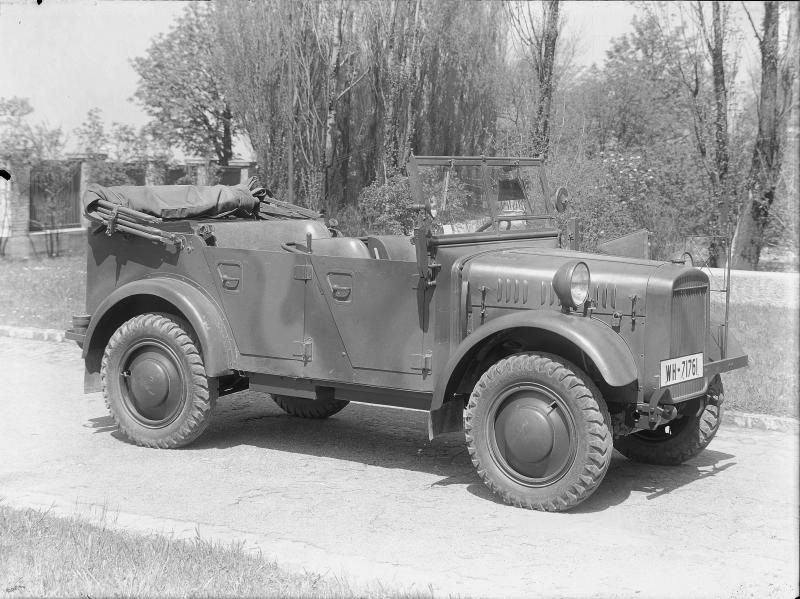 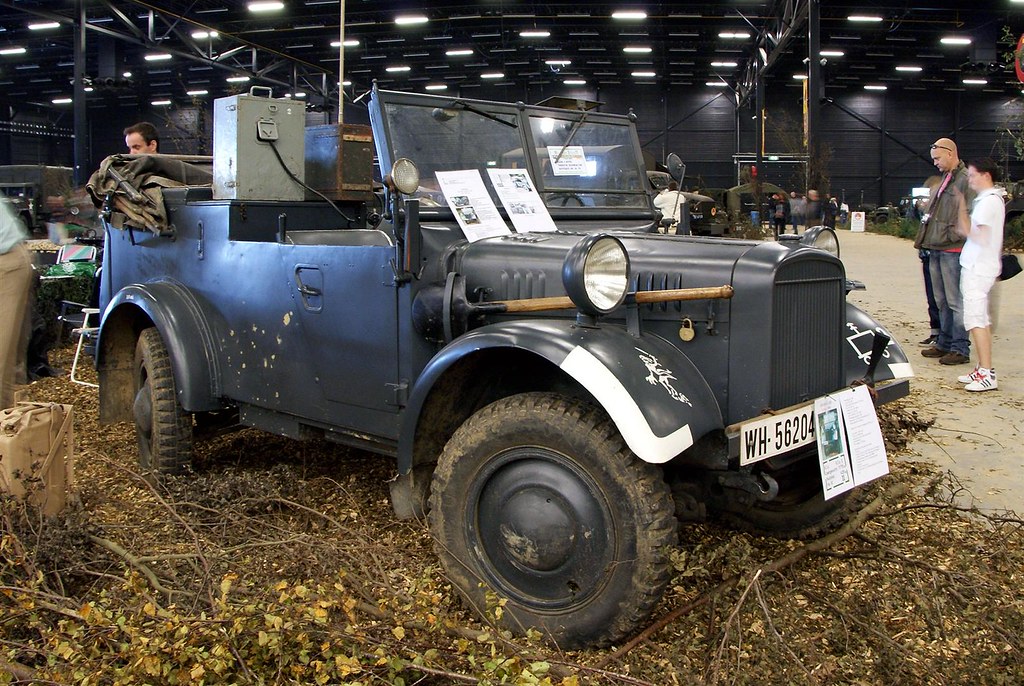 I may make a radio version if there is interest. It would have the proper 3 door configuration, a shelf and include a radio set and antenna mast.

I also made wheel covers that you stick on to get rid of the very clearly US wheels they used in the movies.

I like the look of your Stoewer Grunt, I'll have to order a couple of sets.
Top

Very cool Normandy, did you have to extend the body to make it a "middle" Horch?


Also, here are the MG rollbar and wheel covers I mentioned: 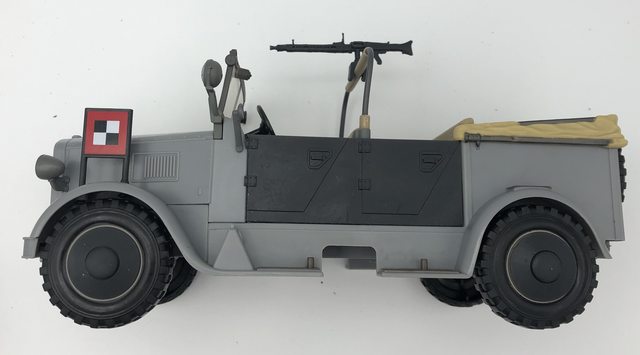 No, its out of the box. The front doors are rounded to fit around the tire and the
rear doors are shorter than the ones you made.

Your door panels look great as do the wheel covers.
Top

I don't mean to change the subject but...Where did all the other new stuff come from?

You've been hard at work Grunt, I've got to make another list.

Good question. That last batch was mainly based on requests from the community.

Grunt, is there any possibility of getting some M-1 Carbines? I can't find any anywhere. Thanks
Top

Grunt,
I've been wondering what it would take to make 1:18 individual track links. I have
used 1:16 Panzer IV tracks on 21st's Panzer IV's...Looks ok but the track links don't line
up with the drive sprocket teeth so I filed them off. I'd like some for the Panther as well.
Both tanks should have the look of heavy track links not rubber bands.

I've wanted to give it a try but I'm just starting out with 3D printing.

Good questions. I made full set of tracks for my Panzer I and they turned out well. The biggest challenge was connecting them all together. I've had great results lately with snap fit parts which you see on several of the heavy machine guns like the Nambu and the Maxim. Let me see if I can adapt that geometry to track links. Stay tuned.

That sounds good Pat, the snap and fit might be the way to go.
Track link and pin work and I like the way
the tracks sit but man thats a lot of pins.

The "rubber band" tracks just don't look right to me. If the snap fit
tracks work...I'm in.

Thank you pat for the "Go" on the M-1 Carbine.
Top

What about sets of the pioneer tools found on many German tanks? I’m thinking along the lines of those seen on the 21st Panzer IV. Parts like the fire extinguisher, spare track parts, a track tension adjuster, a jack fastener, a gun cleaning rod, a shovel, an axe, a crank, and other tools. I’m working on a German AFV project now (Aracula’s Jagdpanzer IV) and such parts would come in handy.

Similar pioneer tool sets could also be made for Allied tanks as well.
"If you fail to plan, you plan to fail."
Top

BTW, I just got some miscellaneous parts from Battleground toys, including the allied tool sets, a German MG-42, etc. The quality of the tooling exceeds a lot of what 21st did and is significantly better than what one gets with the resin casting process. 3D printing is really the way to go

Looks great Normandy.
Maybe before I die or get done with the Hind projects I can put my wheels to work .
Kirk Douglas : Mine hit the ground first
John Wayne : Mine was taller

Thanks Tman and Pickelhaube. Oh and Pickel, die??? No you got to much work to do!

Pat Thanks very much for making these Tiger I outer road wheels.
The FOV 1:18 Tiger is a great piece but the lack of outer wheels bothered me...like watching
the movie Battle of the Bulge and having the M47 Patton stand in as a Tiger Tank.

That Tiger looks great! I was really happy with how those road wheels turned out and you made them look amazing.

Oh and keep it coming you say? How about 25-ish new and updated items.. 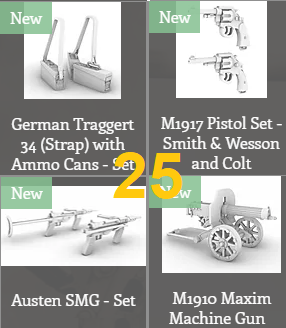 A few more items from this thread have been completed and are in the Battleground store:


M2 Carbine with 30 Round Magazine


Items from this thread on my to do list:
- Pioneer Tools