Top Part: Done
The top part reached full expansion and I got a final mold of it. It worked well and though it had a few surface imperfections the panel lines were intact and the imperfections were premiered and wet sanded away then the panel lines re-etched. Then it was re-cast. It has been kited out and is ready to go. I used the Me262 cockpit to make a few cockpit parts like a seat, stick, gun-sight and instrument panel. It would not fit much else.

I made a custom pilot from the BBi 109 pilot and casted him. He fits great but 21st Century Pilots are a little tight. Anyone who wants a cast of the pilot I’ll add him for $15.

Dolly: Done
The dolly came out great, I did not Hydrospan it, I just scratch built it. Includes hitch, air tank and rolling wheels.

Main Body: In the tank
I noticed a “fisher” after 2 weeks in the tank. A fisher is a seam of unmixed Hydrospan that causes the object to break apart as time goes by in the tank. As soon as I noticed the fisher I repoured another main body and put it in the tank, it’s been 3 weeks and so far so good, no cracks.
When the main body is ready it will be cast and have all the imperfections removed and then recast and then the kits will ship.

Its coming along great Jon. As always top notch work my friend!!
Top

Thanks! Im happy that the concept has been proven and I hope bmore will follow in my footsteps and make more 1/18 aircraft from 1/48.

I know that if this had been done 4-5 years ago there would have been much more intrest. Do you guys think 1/18 is dead? is Hydrospan too late?
http://www.compassion.com/

For me, No! I'm not going to another scale, I've got enough figures and armor for customs to keep me going.
Hydrospan IS NOT too late, you've given us a new tool / technique to keep 1:18 going. This along with 3D printing
and old school customs will cover whatever is not being produced by BBI, Meritt ..........
Top

Jon 1 18 is definitely not dead!!! With Matthew, yourself and others producing in various ways there will be enough for those building/customising and those like me collecting to keep the scale alive and well!
Top

Those posts are hopeful for sure but the fact that I have only sold 3 kits makes me worried that this scale is on its last legs.

Maybe its just this project? Its a small plane that I thought would not require allot.

I thought it would be desirable for Luftwaffe collectors and serious aviation collectors as it was the first attempt at a 60 degree delta wing, the same design that Lippisch would work off of latter in the states to develop some of the US's first supersonic delta wing aircraft.

I wonder what the final tally for sales the Pizzaguy's great Huckelbien kit there were?
http://www.compassion.com/

I wouldn't say 1/18 scale is dead. I think Matt has the right idea. He always does polls to see what people are looking for. More often then not the leader in the poll is eventually built. I myself only collect U.S. Military planes and armor due to available space. I pretty much bought every conversion piece Matt, Pizzaguy and a few others offered to forum members. I think it just comes down to the offered subject. My two cents.
Last edited by rschaap on Mon Mar 07, 2016 1:38 pm, edited 1 time in total.
Top

Jon,
I believe there is much more interest in the REAL FIGHTERS. All my collecting friends here in Germany told me the same: "great to see but I would like to see the real planes not the paper fighters. So a NAtter, Kraftei, Volksjäger should bring more interest (I really hope

)
What do you think about the middle wing parts and a canopy cover to built a Me109 Twin out of the 21st G6??? I would really like to do this.
Or some extra weapons: WGr21 21 cm BR-Gerät (Bord-Raketen-Gerät) and/or R4M Rakete ORKAN.
These would be perfect for the 109G6, Fw190 D9 and the Me262.
Wir haben gehurt, gekämpft und gesoffen, des Führers Mühlen verbraucht, sind auf dem Zahnfleisch gekrochen, doch haben wir uns teuer verkauft.
JG300 Wilde Sau
Top

Crazy Kraut wrote:Jon,
I believe there is much more interest in the REAL FIGHTERS. All my collecting friends here in Germany told me the same: "great to see but I would like to see the real planes not the paper fighters. So a NAtter, Kraftei, Volksjäger should bring more interest (I really hope

I actually did a 109z back in the day, it was not the best but it looked good. It is on this video: https://www.youtube.com/watch?v=TVmzCgNehFs

I never saw that 109 Z Jon, very cool!!! The rest of the video is most impressive, you've done
a fantastic job on those aircraft.

How did you made the middle wings for the 109 Twin? Used the original wings, down cut and glued together??
I love this big guned Me262 PULKZERSTÖRER too. This would be a nice customizing kit too. Not to big (just the gun and the nose cone, right?), easy parts (I guess) and the possibilty for unique models for everyone.
Wir haben gehurt, gekämpft und gesoffen, des Führers Mühlen verbraucht, sind auf dem Zahnfleisch gekrochen, doch haben wir uns teuer verkauft.
JG300 Wilde Sau
Top

Jon if you had started with a Natter I think you would have much more interest,I know I would buy two for sure,I don't think 1/18 is dead ,but you will never see the interest return like 6 years ago,those days are long gone,1/16 is going gangbusters in armor,both r/c and static models,aircraft in 1/18 seems to hold interest only because larger sizes are too costly and take too much room,but 1/18 will never come close in collectable compared to the smaller scales,such as 1/32,1/48 & 1/72,but keep up the great work,looking forward to seeing your next projects

Hey Jon, when your kit is ready I'd like to order two extra pilots with my order. I've never seen the BBI figure.
Top

Normandy, here are some detail pictures of the BBI German pilot that I took when I got BBI's first BF-190G2 model in 2008. It's a decent figure and also the only BBI WWII German in 1:18 scale. However, they went with a simple 5-point-articulation style and also made it a bit smaller so it could fit in the tight cockpit of the BF-109 easily. It's similar in size to the pilot and driver figures 21c included with their original aircraft and armor back in 2000.

Hey Tman thank you for the pictures, thats a good looking and detailed figure.
I wish I had picked up the BBI 109

This figure will look great on Jon's Lippisch P.13a.
Top

Jon this looks great! I'm just not interested in the subject matter but it is quality work nonetheless. That dolly is amazing.
"There are some people who disagree with me, they are wrong." --Gen George S. Patton
Top

normandy wrote:Hey Tman thank you for the pictures, thats a good looking and detailed figure.
I wish I had picked up the BBI 109

This figure will look great on Jon's Lippisch P.13a.

Normandy, you can still find the S2 version of the BBI BF-109 at its retail price of $99. The model replicates one of Erich Hartmann's early mounts. It's my favorite of BBI's two BF-109s and one of my favorite 1:18 aircraft period. They got the colors correct, etc.

Here are some reliable vendors with it in stock:

Jon, I was thinking some of the guys, artists and modelers at Luft 46 http://www.luft46.com/ might
be interested in this project. I've always been a fan of the "What If" / Paper Panzers type projects.

I'm looking forward to building this kit.
I ordered and received the 1:18 GP Pit Crew from TSM Model ( found mine on Amazon ) to be
my 1:18 Luftwaffe Ground Crew.... 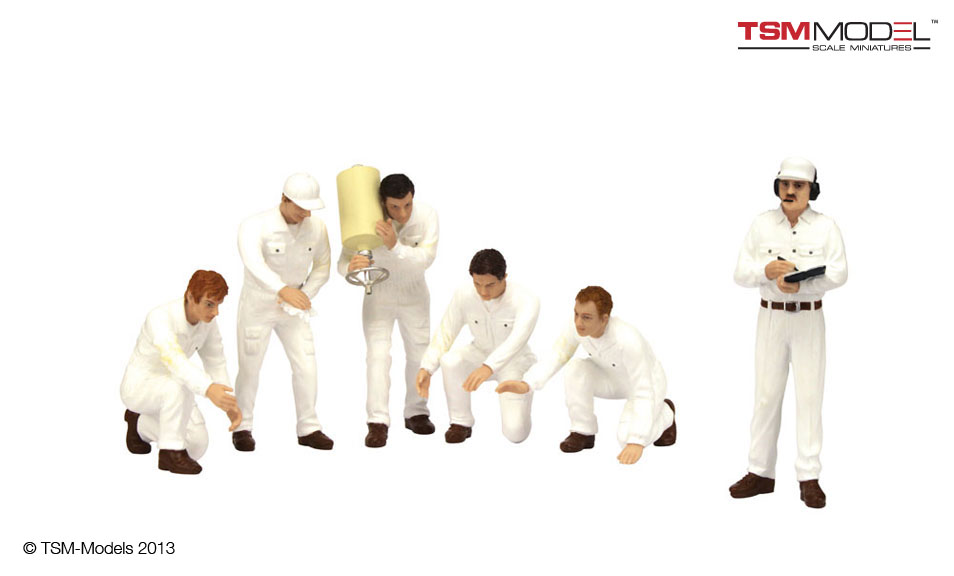 With some work I think they'll look great with the P 13A.

Thanks guys, yea that crew would make a good display. I will reach out to the Luft46 guys and see what they think.

That BBI figure is good in a cockpit, outside hes alittle small but looks good.
http://www.compassion.com/

Ok, this project is taking longer than expected but I am learning allot along the way about what to do and what not to do with Hydrospan.

The main body is huge and it seems that the larger the item the longer it takes in the tank exponentially! It was growing at a 1/4 inch a week at the end!

It finally reached volume, was cast and a resin copy is done. However as you can see it is VERY rough, I tremendous amount of sanding, etching and redrawing of panel lines are needed before I can cast the final and produce the model. It is though the proof of concept I have been looking for. This is it! it is not a cheap or easy or quick route to get what you want, but it can be done without scratch building. Anything is possible if you have the patience and the $$$ for the RTV, Hydrospan and Resin.

Moving along nicely Jon, as with any new technique / technology things take time. This is going to be
a great 1:18 kit.
Top
Post Reply
56 posts