Ummmmm did we forget about the F35. Single seat, single engine, multiple exhaust and it comes in a Marine Corp. version. Just saying.
Top

rschaap wrote:Ummmmm did we forget about the F35. Single seat, single engine, multiple exhaust and it comes in a Marine Corp. version. Just saying.

Merit said "somewhat modern", F-35 isn't even in service yet lol.
It's the project to big to fail after all.

It's definitely the AV-8B Harrier II, still in service as well.
Supposed to be replaced by the 35C next year, but the c's have
Been grounded so who knows.

Besides, I don't think the marines have any other single seat, single engine
Jets other than the Harrier. Correct me if I'm wrong.
Last edited by Jolly Roger on Thu Apr 25, 2013 9:19 pm, edited 1 time in total.
Still withering away from the A-10 Hunger Striker.
Top

rschaap wrote:Ummmmm did we forget about the F35. Single seat, single engine, multiple exhaust and it comes in a Marine Corp. version. Just saying.

Merit said "somewhat modern", F-35 isn't even in service yet lol.
It's the project to big to fail after all.

The future Jack of All Trades and a Master of none.......

I agree It first flew in 2006 and is probably not the plane, however it is the only match outside of the Harrier. I'm getting one no matter what it turns out to be. I am just happy to see a new plane.
Top

I'm a little disappointed that this jet isn't going to be the J-11 or F-15. I really loved those protos and have held out hope to see them come to market one day. If Merit is indeed bringing a Harrier to market I'll probably buy one. The Harrier isn't one of my favorites but it is technologically significant. And as we all know to well, beggars can't be choosers.
Top

Where is my Skyraider?
Top

Short of getting an Official "Green Light" and making sure that I can still keep my job,... We will expand the clues:


A pretty brave choice, but a good one, IMO. Got a big smile on my face right now.

Thanks Jim. Appreciate the position you are in, but obviously the announcement must be imminent.

I always thought the Harrier was the dark horse, as it is much more complicated to do than many of the other contenders.

But, it is much smaller than the F-15, or Su27, so should cost less, and take up less space. Something that has to be considered these days.

I just hope that JSI and Merit take the steps to make sure this does get done properly and accurately. It is a fact that Chinese factories CAN produce great models, but they do seem to need "Western" supervision, and quality control. JSI Tomcat is a perfect example, but even Corgi, HM etc do sometimes have some Chinese made models turn out badly, simply because there was no QC on the production, until it is too late. Not dumping on the Chinese manufacturers, but it is a hard learned lesson that every step needs to be looked at, and given the go ahead from someone who knows what the model should actually look like.

All in all, very happy with this "not an official announcement"

I agree, if it is the Harrier its going to be a great sale as long as it comes out well in the end. If they can match the level of detail Merit put into their Dauntless even better. Price can be another obstacle to overcome but if its done right it may not be as much of an issue down the road. Now, the question remains is their an actual working prototype or is that waiting for a green light as well?
Top

Wasn't the A-4 also used by the Marine Corps. So it could still be the A-4 but my bet is on the Harrier as well. Hopefully it is in the gray/green scheme that was on the Harriers there for awhile from Cherry Point. Will look good.

Last I heard the Marine Corps were in a deal to buy a huge lot of spares from the Brits to keep the Harriers flying due to the obvious fact that the F-35C is going to be delayed. I remember reading a story about this.

Corey,
The A-4 was used by the Marines but, [email protected] said " single engine with MORE THAN 2 exhausts " plus, he ended his clues with" Semper Fi ". Dead giveaway IMO, AV-8B.
I AM dissappointed that the jet will not be the Strike Eagle, still holding out hope for one soon however.

For me - an Excellent choice. Very happy with the AV8-B, and even happier if there's a RAF Harrier or RN Sea Harrier model in the future.

BTW - Coreyeagle48 - I think the huge lot of spares the UK sold to keep the AV-8B USMC jets flying was our entire fleet of Harriers, airworthy or not, we sold the lot.

The Sea Harriers used to be based about 3 miles from here. the sky's a lot quieter without them around.

momentarily delurking [covered up in work-work including lots of overseas time, and some new non-1/18 3D printing projects in what little spare time I have].

I've been following this thread avidly and agree that all the hints make the Harrier the only choice -- and that it's a great choice. If the quality is in the same range as the Dauntless, this will be a superb model, the size is manageable, there's lots of potential for great details (surely the nozzles will swivel and gear -- including the wingtip outriggers -- will work, and there's also huge potential for making variants and repaints over this plane's long and varied service life.

If the molds aren't too far along for tweaking, I sincerely hope that they'll be crafted so that the many, many variants of this plane can be produced over time, and the amazing range of external stores the Harrier has carried can be switched out.

Congrats to Merit and JSI for making a very good choice on this! I'm sure I'll be getting more than one over time.
Top

Now the wait is on to actually see this come to light and in our hands before the year is up.

This reminds me of situation that took place many years back over a Pepsi ad that suggested the possibility of owning a real Harrier if enough Pepsi tabs were collected during the contest. Some restaurant owner was able to collect like 7 million or so tabs and took Pepsi to court when they refused to hand over the jet stating it was just a gimmick to get people interested. That and the fact that the harrier is completely off limits for private ownership/use and only the US government has the authority to had it over which they decline to do obviously. lol

"Sure beats the bus." lol
Top

Heck,
I'm game for a Harrier. Actually a pretty cool choice if true. Compact size, lots of detail and "stuff" to attach to those wings.

Will wait to see if the price is right, but I'm pretty intrigued.
Top

Here's some info on the only privately owned flying Harrier.
http://airventure.org/news/2010/100725_harrier.html
Tanks for the memories
Your breachblocks so black
And oodles of track
Here at Grafenwoehr it's so good to be back
Oh, tanks for the memories..
Top

If it is an AV-8B, I congratulate Merit/JSI on a bold choice that I believe will have a handsome payoff! Even collectors who are running out of space, like myself, will FIND room. If the quality comes anywhere near the Dauntless, I will buy 2! Hopefully they will comeout with the Seaharrier and GR3 as future releases! The only thing I ask is that Merit makes sure the BBI pilots will fit into the cockpit!
Life is tough. It's tougher if you're stupid.

What happened to the BBI 1/18 fighter pilots that were released about a year or so ago?

Are they going to be re-released?
Top

Not just because I'm from AZ, but I wouldn't mind seeing a Harrier Town USA MCAS Yuma Paint scheme

Still withering away from the A-10 Hunger Striker.
Top

Hooo, that looks sweet!!!! Maybe some armament and a couple matching fuel pods and we're good to go.

WOW! SOOOO PUMPED!!! The Harrier is a perfect choice - 1) History-making aircraft as the only VTOL jet to see significant service 2) Decades of storied service for RAF and USMC (Falklands War, Desert Storm, Iraq, etc.). 3) Lots of variants (air-to-air, air-to-ground, US, Brit, Spanish, Italian, etc.) 4) Nice size for 1:18 (small enough to hold it in one hand and go "zoom-zoom" around the house : ) 5) Which also means a little easier on the wallet. 6) Airshow popularity - a show-stealer for anyone who's seen it. 7) As mentioned above, notable public appearances in media.

If it's not your cup of tea, totally understand; but let the rest of us have this moment

Even the F-35C would need this b/c it is single exhaust with the single separate lift-fan up front.
Top

Indeed, nice and small, taking about a 20.2 inch wing span, and a 31.8 inch length.
just slightly smaller than the F-16, so really nice size for a collection.
Still withering away from the A-10 Hunger Striker.
Top 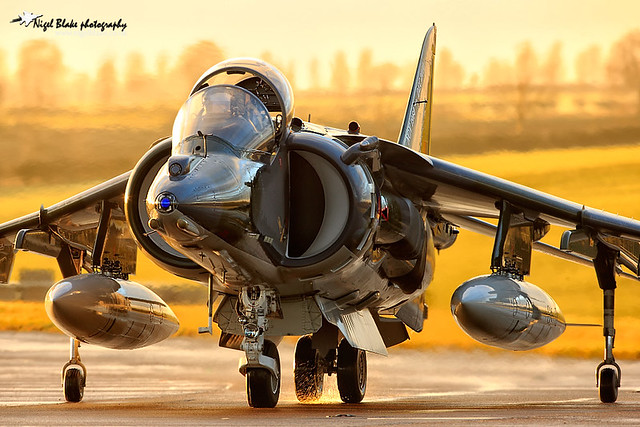