As I remember it, there were several attempts to raise the money/interest in turning the original Enterprise from WW2 fame, into a museum. That would have been fantastic but ended up as razor blades being sold in Wallyworld. What a shame.

At least we have the Intrepid in NY. Nice collection of planes there.

New Dauntless picture up at Merit...looks like Luke is going after
Lord Darth Yamamoto

http://www.merit-intl.com/month/mil-88002.html
The sign of a great model is that one’s eye is not drawn to any one feature, yet one can study it for hours and continually find something new.
Top

The Force was with us at the Coral Sea.

In 15 pages of comments, I'm sure it has already been covered, but does this Dauntless have a single .30 cal for the rear gunner, or a twin .30cal? The pics look like a single mg.

Or am I thinking of another plane?

As a vehicle guy, only a few planes really interest me, Stuka, Me-262, Avenger and a Dauntless.

The Coral Sea 2-S-12 will have the correct single .30 cal.
I am told the Midway SBD will have the twin .30 Cal.
The sign of a great model is that one’s eye is not drawn to any one feature, yet one can study it for hours and continually find something new.
Top

Did you guys notice that the new pics with Luke are not the Coral Sea version?
Top

Its funny you said that I totally missed that earlier as well. The pilot had us so distracted there that I didn't even bother to notice until a few minutes into looking at the photos.
Top

It would have been cooler with stormtroopers in it.

Any more info on the release date of this plane? and how sturdy will this be?. Am looking forward to this plane really like the dauntless.
Top

Okay guys...slight history lesson coming up. There were two major variants of the SBD that fought with the US Navy, the SBD-3 and the -5 versions. Both the -3 and -5 variants carried 4 machine guns. Two in the rear station were .30 cal (flexible) while two (fixed) cowl guns were .50 cal. The biggest difference between -3 and -5 variants were a larger engine and increased ammo bins for the guns. The -5 was already being produced just before Midway, but the -3 was the mainstay during the time...so both would have been present by Midway, but only -3 were available from Pearl Harbor until just before Midway. One other thing. Serial number 2106 (SBD-2) was on Ford Island when December 7th happened (she was getting an engine change) and survived. 2106 later participated in Midway and was damaged. After transfer to California where she was repaired, 2106 was transferred to the Great Lakes training area and later crashed into Lake Michigan. Many many years later she was hauled up and rebuilt into static display at Pensacola Air Museum where she remains today. 2106 is the ONLY -2 with a verifiable combat record and the earliest version of the SBD known to exist today.
US Army MP Corps combat veteran Operation Desert Shield/Desert Storm
Top

one reason why I join the board is know when is the release date of this Dauntless I was told before it will out by winter now it spring and still no Dauntless. any words from the distributor at all?
Top

I would like to see that plane in person, it would be like a holy shrine to me. Just to see or maybe touch a plane that was actually there at Midway.

Would touching your screen be as good?

According to several on-line etailers, the SBD is due out in either late April or May of this year. The new "Sidewinders" paint of the F-18C is due out in the June time frame.
US Army MP Corps combat veteran Operation Desert Shield/Desert Storm
Top

While we are on the subject of paint, does anybody know why the inside of the flaps and dive brakes are painted red ?
Top

From what I gather you'll find this to be the case with other aircraft as well. Dive, speed, and air brakes are sometimes painted red to alert other aircraft behind you that you are either going into a dive or decreasing your speed. This is especially useful when in close formation. It would be like comparing it to a car with red tail lights in a matter of speaking. Some sources refer to them as signal colors. 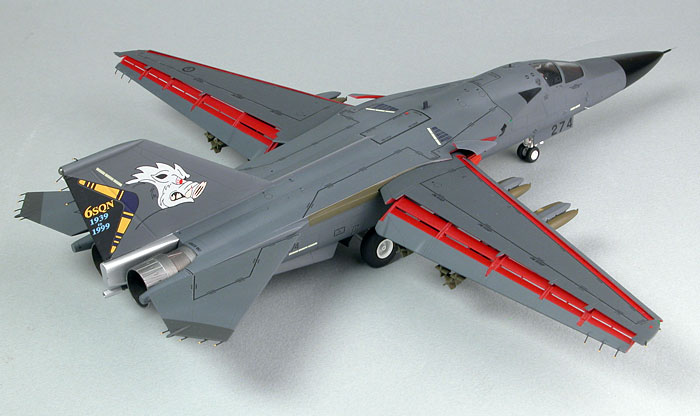 I would like to see that plane in person, it would be like a holy shrine to me. Just to see or maybe touch a plane that was actually there at Midway.

Would touching your screen be as good?

Almost, nice pic [CAT]CplSlade, did you get to touch too?

To add to the red question, did they often leave the dive brakes open when landed and parked?

According to my grandfather who worked as a mechanic on these planes, there was no particular reason to keep the dive brakes open when parked. Sometimes pilots left them open and simply forgot to return them to their closed position. Other times it was just for show. That's all I can tell you. A good search online may provide more answers too.
Top

Actually, I did touch about everything I was able to, which is most of the stuff on exhibit. Obviously the hanging stuff was a tad more difficult.

Kind of surprised they let people touch the planes, considering the rarity of some.
Top

There is a fully restored airworthy Dauntless about a mile from where I live. It flys regularly in airshows.
Top

In actuality, the red paint goes much further than you realize. The dive/landing flaps on the SBD are hydraulic and require positive pressure to remain closed (the upper dive brakes stay closed because of gravity). As the hydraulic pressure releases after the aircraft is parked (and this applies to alot of modern jets too) these flaps, slats and doors may sag open or open completely. When the aircraft is started and pressure is restore, these flaps, doors, and slats will close. Alot of older jets were designed this way too. As for the red paint, originally it helped other pilots see when you were extending flaps for landing (hence slowing down) or diving. Later, landing gear doors, slats, practically anything that could be left open and adversely affect flight was painted red. For example, if you can see red around the main gear or nose gear wells, that tells people on the ground that you have a serious problem in that either the door or the gear has NOT fully closed. Look at pictures of the boarding ladder and door to an F-14 Tomcat....same thing. Seeing red means no fly!!
US Army MP Corps combat veteran Operation Desert Shield/Desert Storm
Top

UPDATE 4-10-2012--from BCA:
Merit has pushed back delivery until June with no reason given.
The sign of a great model is that one’s eye is not drawn to any one feature, yet one can study it for hours and continually find something new.
Top
Post Reply
700 posts